Refelctions, Time and an Ever Present God 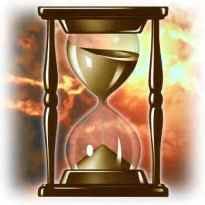 The Webster’s dictionary defines time as: (A): the measured or measurable period during which an action, process, or condition exists or continues (B): a nonspatial continuum that is measured in terms of events which succeed one another from past through present to future

The Rolling Stones sing that time is on our side while Cher wishes that she could turn back time. Leave it to Jim Croce and he would put time in a bottle while Tommy Shaw contemplates over having too much time on his hands. Famous quotes proclaim, “Time is free, but it’s priceless. You can’t own it, but you can use it. You can’t keep it, but you can spend it. Once you’ve lost it you can never get it back.”

When I am overwhelmed with a list of to-do’s, I may spout out “There just isn’t enough time in the day!” When birthdays roll around and I reflect back on the years that have passed, turning my sweet little babies into blossoming adults, I whisper, “where has the time gone?”  When we are missing someone, time may seem unbearable but when we are lying in our lover’s arms, time is eternal.

This morning by accident I clicked on something and my Facebook timeline went back from the present and flashed before me the years of 2009 and 2010. At first I was aggravated, stupid computer! But then I took a few moments to read over some of the things that I had posted almost three years ago. Wow. I laughed, I cried, I breathed a heavy sigh of relief. My heart leaped within me and then it broke into pieces. Ahh, the memories that had been recorded. My oh my how time had changed some things and how some things still remained the same. What a privilege it was to reflect back on some of the best times and some of the worst times of my life so far.

Time is something that we all are granted yet it is something that we can’t control. Like sands through the hourglass, it simply passes without prejudice or favor to anyone. I have known only once in history that time has ever really “stood still” (Joshua 10:13) and only once when time was literally turned back (Isaiah 38:7 –bet that caused a ruckus!!) So for the rest of us, we are at the mercy of the ticking clock. 24 hours a day, 60 minutes every hour and 60 seconds every minute. As much as I would like to say sometimes, “hold up a second!” and everything freeze like it does in space cadet movies, I realize that despite my outbursts, the clock just keeps moving ahead and doing what it was created to do.

I’m a firm believer that someone much bigger than myself is the giver and taker of time and He has allotted me and every other human being a specific measurement on the invisible line between the beginning dot and the ending dot. I debated with Him this morning that the concept of time was like an oxymoron. Whether I spent it wisely, or wasted it, it still passed. Whether I cherished every moment or dreaded the passing hour, it still passed! Whether I welcomed each day with a smile or growled as I got out of bed, the hours still passed without any ado and once the hours were gone, there was no turning back. Only a forward motion to another day, that was, yep, inevitably going to pass. Needless to say, I found myself a little frustrated.

In the midst of my worked up emotional state of being (yeah I know, what else is new, right?) the God of all creation took the time to remind me of something extraordinary about Himself. Although in His sovereignty, He has chosen to put a measure on the length of our days, He is not bound by the limits of time. A day to Him is as a thousand years and a thousand years as a day. He tells me in Psalm 139 that somewhere in the portals of eternity, He wrote a book on my life. Then at the appointed time, He formed me in the dark place of my mother’s womb and fearfully and wonderfully made me. I am positive that there have been many moments over the years of my life that I have leaped right off the pages of His book and carelessly penned some pages of my own. I’m thankful that His grace and forgiveness can dispose of those poorly written chapters and mercifully put me back in the place I belong.

He took a few moments to remind me that, to Him, it isn’t important how much time I have been given. However it is imperative of what I choose to do with it. Absolutely no one is put here for the raw sake of taking up space. God is not careless like that. Space is infinite to Him, and if by chance He ran out, well He can just create some more!

To Him, it is about purpose. And although each and every single human being has a different destiny to fulfill, we all have the same purpose; He wants us to know Him. To live my life as a great success; beautiful, rich, famous, wanting nothing – yet not knowing Him, I have not gained a single thing. To live desolate and depraved, homeless and hungry – never turning to Him, the tragedy isn’t in my poor circumstances, yet in the fact that I never knew Him. As I sat down again today and looked back over the memories of the years I had recorded on my social network page, there was one thing for certain. HE had been there every day! Through every heartache and every joy. Each moment of laughter and each tear that had been shed. Sometimes He stood in front of me clearing the way. Sometimes He was behind me holding me up. Sometimes He was embracing me, calming my fears. And sometimes He was standing back a little watching me as I went along. But ALL the times, He was there. Never a moment passed that I was without Him.

I have no idea how much time I have left here living out the life of this wonderful, emotionally clad creature that He made me. I surely can’t promise that I will spend all of my time wisely. However, I am certain of this one thing, I don’t want one moment of time to pass without Him. I need His presence more than I need air in my lungs. Thank you beautiful Lord for spending this precious time of reflection with me today!

Posted by Christy McMakin on October 3, 2012 in Uncategorized