Of Friday Mornings, Mushrooms and a God Who Answers Prayers 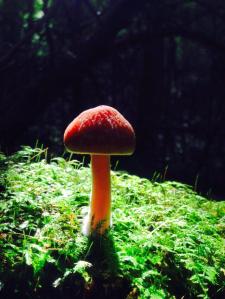 Fridays are my off day from my paying job (with 4 children and 1 grandchild I never have a real day off! Mommas can you feel me??) So as often as I can I venture out on a trail with a hiking partner. Last Friday rolled around and it had been a few weeks since my last adventure. Circumstances prevented a planned outing but my weeks had been extremely taxing and my soul so needed some refreshing. I concluded to set off on my own and enjoy some solo time on a familiar trail. My destination would be Laurel Run Park in Church Hill, a trail with some waterfalls that I had been on once before during the cold weather months and was curious to see in the summer season. With backpack packed, hiking boots on and pole in hand, I put sole to trail and began my day. I chuckled a little as I crossed the bridge and saw a sign that read “Caution, Dangerous Wildlife, Proceed at Own Risk.” I didn’t recall seeing that the last time but perhaps I was too caught up in conversation to notice, and I dared to proceed despite the warning.

The day was over-cast with very little light filtering in through the forest’s covering.  The deeper into the trail I went, the darker it got. After making the stream crossing I was walking along and I began to think about that caution sign…..and bears. My mind began to race. What on earth would I do if I encountered one? Did I tell anyone where I was going today? If one attacked me I would cut him! Fiddlesticks! I left my handy dandy pocket knife in my purse in the car (no I had not been using it on anyone lately) Lord, I know your plan for me is not to be eaten by a bear when I am seeking serenity!  As I think back on it now, I am amused at how entangled I became with thoughts of a bear that was nowhere near. How many times in life do we allow ourselves to get wrapped up in worries that never happen? That we let our fears get the best of us? That we focus on the things that might happen versus the things that we know are true?

It wasn’t long until the melody of the stream became the song that I longed to hear. A few more steps and I had reached my destination of the waterfall. All thoughts of anything on the outside world fled my mind and I became entranced with the sights, the sounds, the aromas that surrounded me. I lingered at the fall for about an hour, taking pictures, exploring the different angles, playing in the rushing waters, inhaling the fresh smell of the wet earth and admiring the beauty of my surroundings. I proceeded on up to the top of the falls and found the perfect spot to sit for a spell and talk to my Father about the things that were weighing on my heart. Did He hear me? Would He answer? Would things be ok? I repeated a phrase that I had uttered many times before along my journey called life, “Lord, I believe, but help me with my unbelief.”

The clock was ticking away and it was time for me to wrap things up.  I headed back to the trail and was tossing through my mind whether I had time to proceed on up to the second fall.  After checking the hour, I knew I needed to head back to the car but I put in one simple request before I began my trek back. “Lord, I would really love to see a mushroom! Something curious and interesting!” Literally within two steps I looked down and standing there, illuminated by a single ray of sun that pierced through the darkness was the most exquisite mushroom I had ever laid eyes on! I swear I heard that “ahhhhhhhh” you hear in movies when something magical happens. I knelt down to examine this handsome specimen and was awed by his stance, the way his colors complimented the blanket of green moss he sprouted from. He was magnificent and I was enamored. When I was finally able to peel my attention away from this wonderful mushroom, I saw another one, totally different in appearance but nonetheless stunning. Then another one and another one! How had I missed these beauties on my way up? Had I been too focused on thoughts of a bear that didn’t exist? Did God just answer my prayer and kaboom! They were there? I’m not sure which scenario was right, I just knew I was happier than a fat kid eating cake as I went from one mushroom to another snapping shots and admiring their uniqueness.

I stood there for a moment, somewhat shocked at how quickly my simple request had been answered. Not only did I see one mushroom, but I had been blessed with a showcase in every direction. Thanksgiving couldn’t help but escape from my lips and it was then that I heard the response that brought me to my knees somewhere in the middle of a trail nestled in the woods of Hawkins County. “If I hear you when you ask for simple things and I answer you, how much more do to you think I hear you when you ask for greater things? For your children, your family, those that you love and I love even more?” Psalm 18:6 says “In my distress I called upon the Lord, and cried unto my God: he heard my voice out of his temple, and my cry came before him, even into his ears.”  On a beautiful, serene Friday morning the most High God of heaven, the creator of the universe, the maker of the sun, moon and stars, author of my life, my Father and my Friend met with me in the woods. He ministered to my spirit and soothed my soul, reminding me that, yes! He hears my every prayer, every request, whether they are simple or heartfelt cries. He assured me once again that He is always with me, His promises are ever true and His word never fails.

As I headed back to the real world with every step my feet felt a little bit lighter, my stride more joyful and my spirit rejoiced! There were no thoughts of unseen bears lurking in the distance. Instead thanksgiving and praise to my God bellowed out of my gut. I was thankful for His presence, for His assurance, for His voice and for mushrooms.

Some of the other gems I found 🙂

Posted by Christy McMakin on August 19, 2014 in Uncategorized